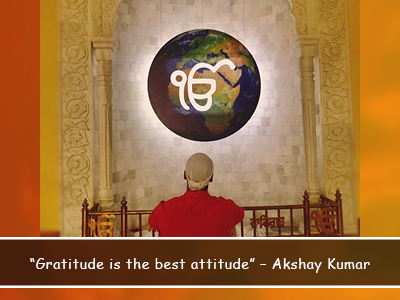 Akshay Kumar, a man of principles is currently in the UK shooting for his upcoming film Bell Bottom. Along with him is the entire cast of the film that includes Vaani Kapoor, Huma Qureshi, Lara Dutta and more. The actors and the film crew are ensuring that all safety measures are being adhered to meticulously. Amidst the crazy schedule on set, Akshay Kumar, who is also know to strike a perfect work life balance, found a little moment of peace at a Gurudwara in UK.

He took sometime off from work and decided to visit a Gurudwara to thank the almighty for all that he has and for all the blessings. Here’s what his caption read – “Had a rather blessed morning…spent ten minutes in this Gurudwara today and counted my blessings. I feel a sense of calm I haven’t in months. #GratitudeIsTheBestAttitude 🙏🏻 #IkOnkar”

Had a rather blessed morning…spent ten minutes in this Gurudwara today and counted my blessings. I feel a sense of calm I haven’t in months. #GratitudeIsTheBestAttitude 🙏🏻 #IkOnkar

Post Bell Bottom, Akshay Kumar has a series of interesting projects lined up for him, starting with an OTT release Laxxmi Bomb directed by Raghava Lawrence. As per reports, he will also soon begin working on his first period drama Prithviraj with Manushi Chhillar. 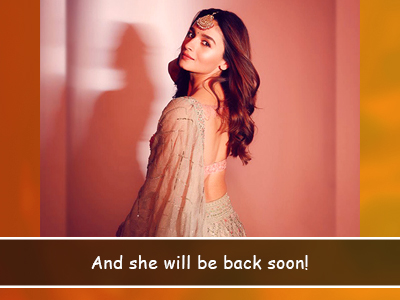 Alia Bhatt is one of Bollywood’s most admired actresses. Her onscreen presence as well as her impeccable acting abilities is appreciated by all. She had a couple of projects lined up in 2020, however, they had to be stalled due to the ongoing pandemic. One of her bigger projects of the year – Gangubai Kathiawadi helmed by Sanjay Leela Bhansali will finally resume work in October after months of delay. A few months back, the set of the film was taken down as monsoons would affect it severely. As per reports in a leading daily, Alia Bhatt is now all set to start shooting her solo scenes first which require only a few people on set. The elaborate scenes will be shot later. At the moment, the set of the film is getting ready and will also be sanitized thoroughly.

A reliable source revealed, “In the first post-pandemic schedule, they will film solo scenes of Alia Bhatt and other sequences that require fewer people. Some cheat shots will have to be employed, which will be corrected later at the VFX stage.”

The first look of the film that was revealed a while back got her fans too excited and they couldn’t wait for this period drama to hit the theatres. To witness the epic life of Kamathipura’s madam Sanjay Leela Bhansali style is worth the wait after all, right? 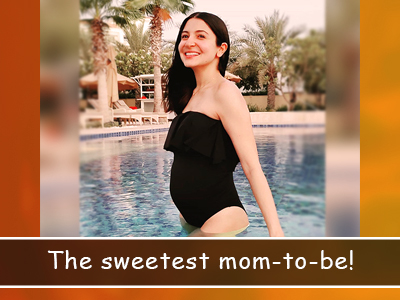 Yesterday on #WorldGratitudeDay, Anushka Sharma uploaded a picture of herself in a black monokini flaunting her baby bump and the pregnancy glow. Her caption supporting the picture is beautiful and struck a chord with us at so many levels.

“Acknowledging the good that you already have in your life is the foundation for all abundance” – Eckhart Tolle
Gratitude to all those who showed me kindness and made me believe in goodness in this world , opening my heart enough to practice the same with the hope to pay it forward 💜 Because … ” After all , we are all just walking each other home ” – Ram Dass
#worldgratitudeday 💫

“Acknowledging the good that you already have in your life is the foundation for all abundance” – Eckhart Tolle Gratitude to all those who showed me kindness and made me believe in goodness in this world , opening my heart enough to practice the same with the hope to pay it forward 💜 Because … ” After all , we are all just walking each other home ” – Ram Dass #worldgratitudeday 💫

The actor was also happy with her victory of her team her husband represents! She shared her happiness with her fans on social media by sharing an image from last evening’s match. 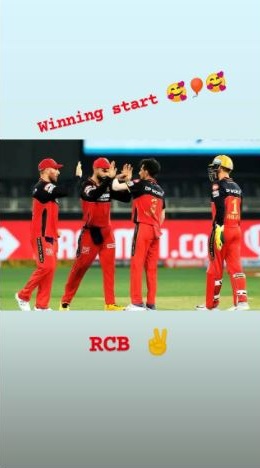 Good times are rolling in for this power duo indeed! 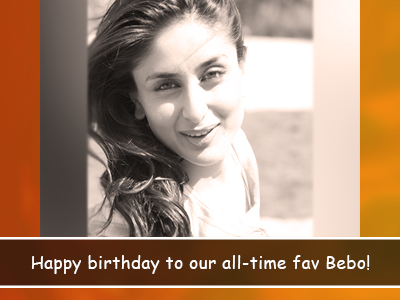 Kareena Kapoor Khan, the ultimate queen of Bollywood turns a year older today. She’s someone who has redefined style, maternity style, the way a woman should be at every stage in her life, and just live by our own terms without succumbing to pressure. Her script choices are impeccable and her presence in any film takes the film many notches higher. She’s an inspiration in herself. Not to forget, her acting abilities are a class apart. Infact her dialogues fit many situations in our day to day lives as they are so relatable. On Bebo’s birthday today, we want to share some of her dialogues that have a special place in our hearts. 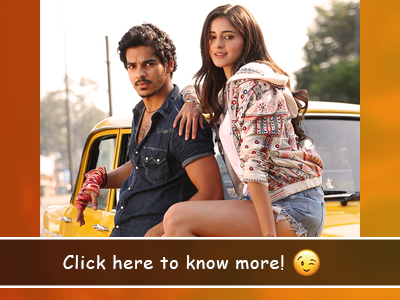 Ananya Panday and Ishaan Khatter are all set to woo their fans and audiences with their upcoming film Khaali Peeli. Currently in Goa, their fans somehow can’t seem to get enough of them. The chemistry between the two is much loved and we kinda see why. Last Ananya took to Instagram to share her experience of working with Ishaan for the first time and we have to say how we were in splits after she answered it. She shared a throwback photo and video from sets in connection with it.

In the video, Panday is trying to balance a coconut on her head while Ishaan is recording it all on camera. Ananya dressed as her character is seen in a white top and focusing on balancing the coconut on her head. To add on, Ishaan is seen filming it and teasing her simultaneously while she attempts the balancing act. Seeing the cute banter, fans showered love on the two.

Fun right? If the BTS is so much fun, we cannot wait to watch these two set the screen on fire. The film is helmed by Maqbool Khan and produced by Zee Studios, Ali Abbas Zafar and is all set for an OTT release on 2nd October, 2020. 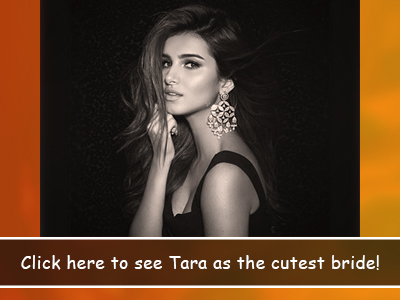 Tara Sutaria who made her debut in SOTY 2 and then appeared in Marjawaan opposite Sidharth Malhotra made a place for herself in the hearts of her audiences and fans very quickly. She often gives her fans a little sneak peek into her life through her social media feed and we have to admit how entertaining it is to be part of her life virtually. The actor has been spending time at home doing things she loves before resuming work like baking et cetera.

A while ago, she uploaded a picture of herself as a bride from Marjaavaan and thanked Milap Zaveri and Nikkhil Advani for letting her play an on screen bride and for letting her bring out her goofy side. Her caption read- “All brides are beautiful okay 😂 ( Gotta love/thank Bollywood for letting the inner bridezilla out before the real deal happens ) @milapzaveri @nikkhiladvani 😂🙈❤️”

Tara is the happiest playing a bride and clearly this picture proves it.

On the work front, Tara seems packed. We’re excited to watch her opposite Ahan Shetty in the Hindi remake of RX100. Not only that, she will also be seen in Mohit Suri’s Ek Villain 2 with John Abraham and Disha Patani.

Exciting times ahead for Tara, indeed! 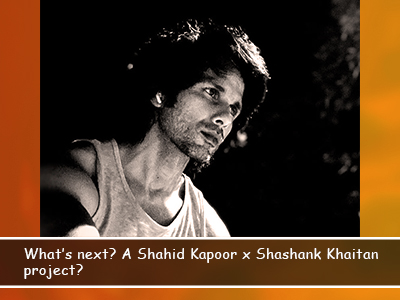 After the success of Kabir Singh in 2019, Shahid Kapoor has been bagging one project after another and it looks like he’s not stopping. His upcoming project ‘Jersey’ seems promising and we cannot wait to see him ace it in that film as well. Apart from this, we heard that Shahid Kapoor will be collaborating with Karan Johar soon.

According to a reliable source, “Karan and Shahid were planning to do a film together for sometime. But they weren’t getting the right script. There was a major talk about Shahid stepping into the shoes of Brigadier Farookh Bullsara for a film based on Maldives Mission. But now, the producer has locked Shahid for Shashank Khaitan’s next which is also an action film. It’s titled Yoddha and Shahid has already signed on the dotted line for the same. Shoot is expected to begin sometime early next year, after Shahid wraps up Jersey.” Let’s hope for an official announcement soon!

Post Jersey, Shahid will be essaying Suriya’s role in the Soorarai Pottru Bollywood remake where he’ll play the role of  Air Deccan founder GR Gopinath. Not just this, we might also watch Shahid make his digital debut too next year.

We’re looking forward to be smitten by him, you? 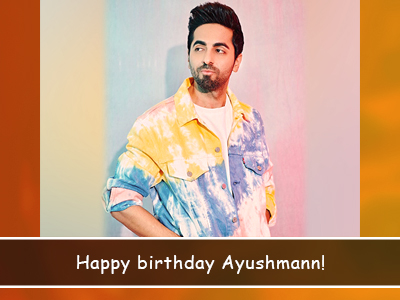 Ayushmann Khurrana, an ace actor, performer, singer, and human being turns 36 today! From a smart selection of movies to doing absolute justice to this many roles he essays, Ayushmann Khurrana has eventually emerged as one of the most successful actors of our time. His wife Tahira who is an inspiration in herself, found the sweetest (literally) way to wish the actor. With cake rubbed all over his face, a sweet little peck on his cheeks warmed our hearts. This duo is inseparable and this picture is just makes us love them a little more!

Fans, friends and peers from the industry showered Ayushmann with lot of love and happiness too. Professionally, Ayushmann has been a part of some of the most celebrated films in the box office. He is also known for hand-picking the most interesting and concept driven scripts. Guess that’s what really sets him apart and speaks volume for his success and the many awards in his kitty. We just cannot wait for more of Ayushmann on the silver screen! <3 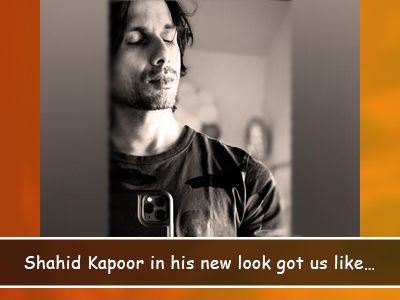 Shahid Kapoor isn’t known to be the person who shaves his beard off very often but when he does so, he makes it a point to flaunt it. Last evening, Shahid Kapoor shared pictures of his new look and this isn’t just one or two pictures, he shared three! A few days back. the actor decided to shave his beard off completely and this made his fans fall in love with him all over again as it was a sweet dose of nostalgia for them. He now has a new hair do with a gorgeous stubble and fans can’t help but love this look as well.

He shared these pictures one after another on his Instagram feed and his fans couldn’t keep calm. With heart and love struck emojis being dropped every second, we can say that he is loved and his fans are really looking forward to watching him in his upcoming film ‘Jersey’ on the big screen really soon. Here are some pictures that you can’t not see!

Getting my share of vitamin D for the day.

If you hadn’t seen these, you’re welcome! 😉