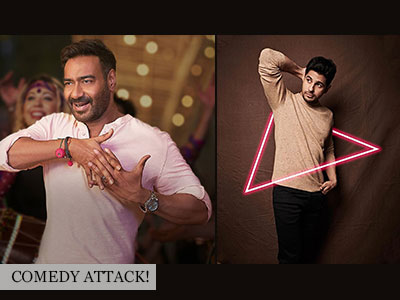 Looks like, Ajay Devgn is all set to give his best shot in 2020. Ushering with a blockbuster, the actor is already high on success with Tanhaji- The Unsung Warrior. Not to forget his previous outing in Indra Kumar’s Total Dhamaal which was a massive hit too. Now the director is prepping up for a social comedy flick starring the superstar himself.

Apart from Ajay Devgn, Sidharth Malhotra has been roped in as the co-star in the film. Collaborating for the first time, we cannot hold our excitement to see this duo’s comical avatar on the BIG screen. Rumour has it that Rakul Preet Singh has been approached as the leading lady for the film. Sounds interesting, right?

Due to prior work commitments of the lead actors, the film is likely to go on floors in May. Speaking about the new project, the sources said,” The filmmaker had narrated three scripts to Ajay. Since he has done a spate of serious movies including biopics, actioners, and historical dramas, the actor was looking for a light-hearted comedy. Ajay zeroed in on this script as he liked the larger point the story tried to make while eliciting laughs.”

The sources also quoted,” The film is along the lines of the Munna Bhai series as it revolves around two bumbling do-gooders with hearts of gold, who are out to reform society. It has been Indra Kumar’s passion project; he had been scripting it for years. He is thrilled that the story will finally be translated on screen.”

Meanwhile, Ajay Devgn will star in SS Rajamouli’s RRR, Bhuj: The Pride of India along with a special appearance in Rohit Shetty’s Sooryavanshi. On the other hand, Sidharth Malhotra recently wrapped up the shoot of his upcoming film Shershaah.