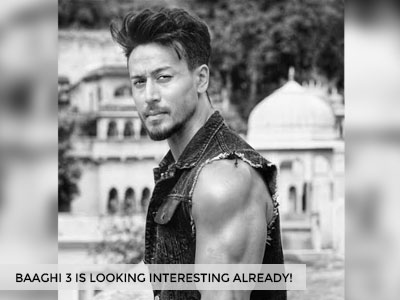 There’s never a dull moment with Tiger Shroff around. He is known as one of the most down to earth actors and a mood-lifter. Not to forget, his dance moves and screen presence are also applaud-worthy.

With his previous blockbuster War opposite Hrithik Roshan, the actor definitely proved his worth. Up next for him is Baaghi 3 opposite Shraddha Kapoor and Riteish Deshmukh in the lead roles.

While the film is its initial stages, the actor treated his fans on Instagram to a stunning BTS shot. It’s a gorgeous black and white picture where he flaunts his chiseled body (OMG!!) and a flawless raw look. Let’s also take a minute to admire that intense gaze, because why not? 😉 If only a BTS shot is so stunning, imagine what he’d look like in a 3-hour long film? We’re totally looking forward to it. How about you? 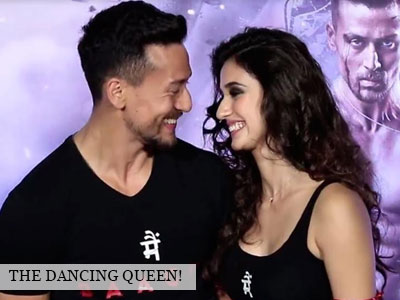 Till date, Bollywood has never failed to surprise us with some action packed sequels. The curiosity builds up as and when we get to know about the continuation of films that we’ve loved SO MUCH. Taking a cue from films like Golmaal, Dabangg, Krrish, the makers of Baaghi too are coming up with their third installment starring Tiger Shroff and Shraddha Kapoor in the lead roles.

The news got better when we go to know that Disha Patani has been roped in for a dance number in the film. If she created a rage in the super peppy track Slow Motion opposite Salman, imagine what she’d do alongside Tiger Shroff. FYI, Mundeya toh bachke rahi from Baaghi 2 still one of our favs!

Disha Patani was the leading lady in the previous franchise while Jacqueline Ferdandez made a special appearance in revamped version of Ek Do Teen. As per the sources, “A set has been constructed at a city studio and Disha will be seen shaking a leg with hundreds of background dancers. Like the previous dance number, this one too, will be a part of the film’s narrative and take the story forward. It’s a quintessential Bollywood dance number.”

Surviving the chilly weather in Serbia, the entire film crew wrapped up it’s shooting schedule a few days back. While most of the scenes are shot in Serbia, they preferred to shoot Disha’s dance number in Mumbai itself which is choreographed by Adil Shaikh.

Speaking about their relationship status, the couple is often spotted hanging out together and trust us, it’s a treat.

Apart from them, Ritesh Deshmukh, Ankita Lokhande and Vijay Varma are other prominent stars featured in the franchise. The film is directed by Ahmed Khan and produced by Sajid Nadiadwala, Baaghi 3 will hit screen in March, 2020. Tiger Shroff and Disha Patani are back in the Bhaagi avatar and all set to Rebel for Love.

While fans of the rumoured couple are overjoyed to see their recent holiday pictures, the duo has now released the official poster of their upcoming movie ‘Bhaagi 2’.

Tiger Shroff is seen flaunting his perfect body on the poster. The actor shared the official poster with this tweet earlier today.

This poster of the sequel to the 2016 release Baaghi has created quite a buzz all around. People have loved Tiger Shroff’s rugged look and chiselled body.

The movie is set to release on 30th March 2018. It is produced by Sajid Nadiadwala under the banner name Nadiadwala Grandson Entertainment and directed by Ahmed Khan.

Are you excited to see the couple romance on screen again? Tell us in the comments below. Bollywood stars had a gala time bringing in the New Year’s. Most of them were seen vacationing outside the country in various beautiful locations. However, one couple and their holiday destination caught our eye.

News of Disha Patani and Tiger Shroff dating have been doing the rounds for quite some time. Now a couple of pictures posted by them from their recent holiday has the rumour mills running again.

The rumored couple shared snapshots of their super fit bodies while relaxing by the beach.

Take a look below:

Son of a ðŸ– pic.twitter.com/JxbypxPNoc

Now as you can see the backdrop for both the pictures are quite similar and fans have drawn the obvious conclusion of them being together.

If sources are to be believed the rumored couple is together in Sri Lanka.

What do you think of this news? Tell us in the comments below!