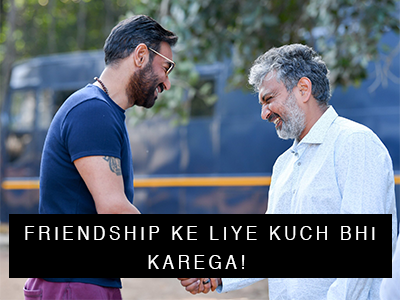 It’s no new information for us when Bollywood’s A-listers charge a bomb for their films and these aren’t hundreds or thousands but it’s ‘hundreds of thousands’. With more than 100 films in his career trajectory, Ajay Devgn promises to enter the 100 crore club once again. The Tanhaji actor’s sheer kindness can literally make your jaw drop. You know why we are saying this? Because Ajay Devgn is all set to make a cameo in SS Rajamouli’s upcoming action film RRR. But here’s the twist in the tale. He has not charged a single penny for this role. And we cannot stop gushing over him for his kind deed. Looks like he is clearly setting some major friendship goals with the director. This relationship stems from their collaboration in Rajamouli’s film Eega that was released in 2012. FYI, the actor has dubbed for the film’s Hindi remake Makkhi. After 8 long years, he is looking forward to work with his buddy-cum-director again.

In a recent tweet, Ajay Devgn expressed his gratitude towards the director-

My association with @SSRajamouli Sir dates back to 2012. We’ve collaborated in many interesting ways since. Working with him in #RRR is an honour & pleasure. https://t.co/G88HeNAVLG

As per the latest reports, a source said, “Ajay didn’t want a single penny for his guest appearance. Rajamouli’s producers were even willing to pay him his full market price for the guest role. Ajay said he would rather not take any fee for this friendly appearance for a friend.”

Along with his special appearance, RRR also features Alia Bhatt and south superstars- N. T. Rama Rao Jr and Ram Charan. Speaking about the film, the plot revolves around the lives of India’s freedom fighters, Alluri Sitarama Raju and Komaram Bheem. The much-awaited film is scheduled to hit the silver screens in January 2021.