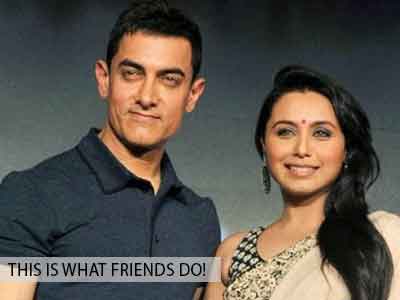 Over the years, we’ve always admired Aamir Khan and Rani Mukherjee’s on screen chemistry. This jodi ruled the box office with their evergreen blockbusters like Ghulam, Mann, Mangal Pandey: The Rising, and Talaash. Surely, this decade long friendship is hard one to miss, right?

Talking about their rapport, Rani Mukherjee’s new film Mardaani 2 got a huge shoutout from the perfectionist himself on social media. The Dangal actor applauded and congratulated her for the film’s successful innings at the box office. This is also because everyone is awestruck with her performance and is receiving the much deserving response.This appreciation post by Aamir Khan for Rani Mukherjee is pure #friendshipgoals. It’s always good to have a cheerleader for you, after all!

Rani!!! Hearing great things about Mardaani 2! Can’t wait to see it. Congratulations and all the very best!
Love
a.

Watch the jaw-dropping trailer of Mardaani 2:

This film is the sequel to 2014’s Mardaani that is based on a real life incident. Helmed by Gopi Puthran, it shows how a bold cop Shivangi Roy deals with the challenges while fighting against the heinous crime committed by the rapists.

As for Aamir Khan, currently, he is working for Laal Singh Chadda which is an official remake of Tom Hank’s Forrest Gump.

Rani Mukherjee yet again proves that women are here to rule. Kudos to the actress for bringing out the serious issue loud and clear. Ever since it’s conceptualization, social media has always played as a bridge that closes the gap between celebs and their fans. Many of our B-Town celebs are pretty active on social media, interacting with their fans and followers.

Of course, Kanana Ranaut is not your usual B-Town celeb. While she loves her fans and appreciates their support, she does not believe in joining the social media bandwagon.

When asked about her thoughts on social media and their implications, here’s what she had to say, “I am not on the platform. I feel there are two sides to any coin. If they (celebrities) like to enjoy the pampering and the likes, it’s one thing. Then when it goes the other way and you think ‘people are not liking me anymore’ it’s a problem. I do miss seeing moments where I can post a picture and get likes from a million people, but at the same time, I know the repercussions. There are times when everybody will be annoyed with something. They have to understand the frivolous nature of the platform and not take it too seriously.”

Even so, we would love to see the queen on social media. What do you think? Tell us in the comments below. By her own admission, Katrina Kaif is a celebrity who does not like to make her private affairs public. She has stayed away from social media for a very long time, joining Facebook only last year.

After being in isolation for all these years, it looks like she is now ready to come out of her safety bubble. For the past couple of days, she has been sharing cryptic messages with her Facebook followers regarding her plans to join a new social networking site.

She first shared a picture of herself, captioning it “Getting myself a new place soon… will you come visit me if I share the address with you ..?”. Which stirred up a storm of messages from her followers who took her words too literally.

But then things started getting clearer when her next post said “Tomorrow” with a picture of herself holding a paper with “April 27th, see you soon” written on it.

And the final confirmation came with her post today that read, “Today is here ….. See you all LIVE by 2pm”.

Better late than never. We are more than happy to finally have Kat on Instagram!