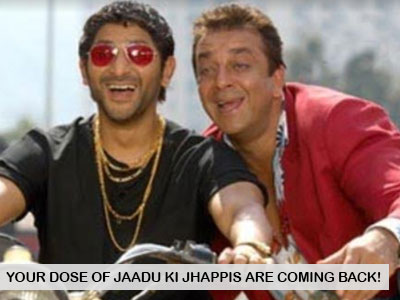 From teaching Gandhigiri to living his life to the fullest, Munna Bhai aka Sanjay Dutt has taught us some good life lessons with a dose of laughter. Remembering the humorous punchlines, the heart-warming scenes are still fresh in our minds. What makes it even more special is the buzz around the film’s third sequel.

Munna Bhai fans are finally rejoicing as Vidhu Vinod Chopra has confirmed Munna Bhai 3. What’s more? Our favorite Sanjay Dutt will be leading this project and playing the cutest bhai once more. No one other than him can play this character after all? It’s also been a decade since we’ve seen Munna Bhai and Circuit’s crazy bhai giri, and we have missed it!

May the stache be with you ? #Movember

In a recent press conference, Vidhu Vinod Chopra cleared the air about the sequel and said, “I really want to make Munna Bhai. I want to make some fun films now. I have been wanting to do Munna Bhai for a long time. Now finally, we have something that I would want to do.”

When asked about the tentative release date, the producer further clarified, “How can I say that? I am going to work on it from 10th (February). We have got the right idea but we have to work on that. I can’t say how much time it will take to make but I really want to make it, because wherever I go people ask me about it. So, we have to make it before people get upset with us!”

On the work front, Sanjay Dutt has two upcoming projects in the pipeline- Shamshera and Sadak 2. Both films are scheduled to hit the theatres this year.

Without any doubt, Munna Bhai 3 is going to be a blockbuster just like the previous sequels. What do you think? Let us know in the comments below!