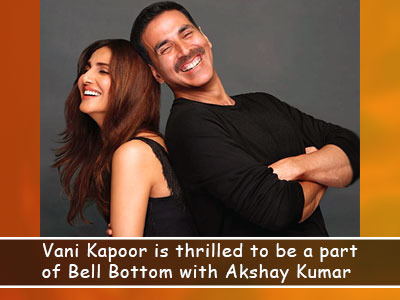 Ladies and gentlemen, gear up for a super cast who are all set to star in an espionage thriller called ‘Bell Bottom’! About two days back, Akshay Kumar and Vaani Kapoor were spotted outside Pooja Entertainment which later led to them confirming their next project. A few hours back, Vaani took to social media to announce the next big thing for her with some adorable pictures with her co-star Akshay Kumar. The actress also captioned the pictures expressing her excitement for the film and about teaming up with Akshay Kumar.

About the film, we hear that Bell Bottom is an espionage thriller from the 80s era. Directed by Ranjit M Tewari and produced by Pooja Entertainment, this one comes across as a promising one. The scripting of Bell Bottom was being written amidst the lockdown and the team even shared pictures of their video chats with Akshay Kumar. While speaking with Hindustan Times, Jackky Bhagnani said that Vaani is an intelligent actor and that he has loved all her work on screen. He further said that her role in Bell Bottom is in sync with Akshay’s character. He also shared that it is a meaty one and hoped that Vaani would be able to ace it with Akshay.  The film is scheduled to release on April 2, 2021.

We’re as excited and thrilled like Vaani and the entire team of Bell Bottom!