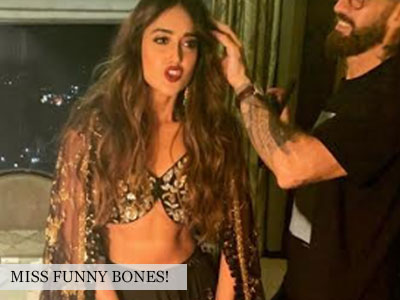 Apart from impressing us with her impeccable performances, Ileana D’Cruz never fails to surprise her fans with what’s on her mind. Speaking about her social media presence, she is always up to give us a little sneak-peek into her glamorous life. This time the actress shared some of her off-screen masti which you cannot miss.

Ileana D’Cruz completely left us in splits with her goofy reel of pictures and boomerang videos that she shared on her Instagram. Donning a black lehenga with a sheer dupatta, the stunning actress was trying hard to keep a straight face throughout her prep scenes. Not to miss, was her caption that best described her chirpy moments. She looks funny and oh-so-cute at the same time, doesn’t she?

Here are the pictures that are an instant mood-lifter

On the work front, Ileana D’Cruz was last seen in 2019’s multi-starrer Pagalpanti, directed by Anees Bazmee. The film also starred Anil Kapoor, John Abraham, Arshad Warsi and many others in the lead roles.