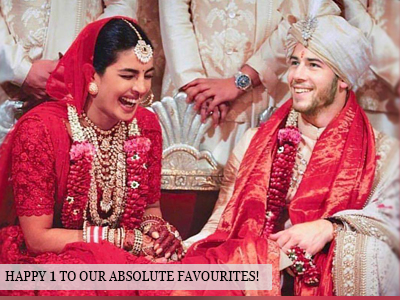 Last year this time, we couldn’t get enough of pictures from the most awaited wedding if the year – Priyanka Chopra and Nick Jonas. The week-long wedding was a sweet amalgamation of Indian as well as the western traditions and both, the bride and the groom looked stunning as ever. Be it walking down the aisle in a gorgeous white gown with the longest trail or in a regal maroon lehenga, Priyanka Chopra Jonas was easily a major inspiration for many! Nick Jonas, on the other hand, was the most charming groom we’ve ever seen.

They complete a year to their wedding already and both of them treated the world to a beautiful throwback by sharing some of their adorable wedding pictures. Here’s a quick glimpse!

My promise. Then..today.. forever. You bring me joy, grace, balance, excitement, passion.. all in the same moment…thank you for finding me..Happy First wedding anniversary Husband.. @nickjonas ❤️? And Thank you to everyone for the love and good wishes. We feel blessed.

One year ago today we said forever… well forever isn’t nearly long enough. I love you with all of my heart @priyankachopra happy anniversary.

Not only that, but the duo also welcomed a little pup home. FYI, the little one stole our hearts too!

Pri came home with the absolute best surprise this morning. Please meet our new pup @ginothegerman I haven’t stopped smiling since I woke up this morning and finally realized what was going on. Thank you @priyankachopra ❤️ ?

Just how cute are these two? <3 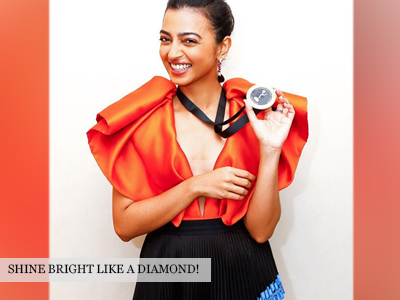 Priyanka Chopra, Deepika Padukone, Irrfan Khan, Aishwarya Rai Bachchan are one of the many who’ve made it big in Bollywood as well as Hollywood. They patiently climbed the success ladder one step at a time till they made it till to the top! After these superstars, another celebrity is about to get added to this list for her latest achievement.

Radhika Apte, nominated for for Best Actress in a Drama Series for her role in a web- series at the International Emmy Awards 2019 is making headlines every where! She also shared her accomplishment on Instagram with her nomination medal straight from Emmys. How sweet, isn’t it?

Nomination medal! Thank you @iemmys ! Every nominee was given a medal today.. So honoured! Looking forward to the main ceremony on Monday!

Radhika Apte is one such actor who made her name in the industry with years of hard work! In the era of commercial films, it gets difficult for an artist to stand out in the crowd, however, her simple yet power packed performance in films like Andhadhun, Pad Man, Manjhi garnered the much needed love and support from everyone. Ever since her Hollywood debut in Quantico, Priyanka Chopra has been taking the industry by storm. With her critically acclaimed work in Baywatch and three new Hollywood movies in her bag she has been subject to a lot of scrutiny.

Following her Hollywood fame, she has featured on several American talk shows where she has been subject to the darndest questions. But never the one to bow down from a challenge, PeeCee has had a witty comeback for every question.

Check out some of her coolest interviews that prove she is the Lady Boss you do not want to mess with.

1. When Chelsea did not care to sugar-coat it

4. When Jimmy Kimmel implied she was dating a minor

5. When she had the sassiest reply

6. When she owned the interviewer at the Golden Globes

7. When her reply was too hot to handle, even for Rachael Rae

She isn’t ‘Priyanka Chopra’ for nothing! We cannot wait to see what she has in store for her future interviews. But one thing is guaranteed, we can expect nothing less than entertainment from her. Our desi girl was having the time of her life exploring the city of Berlin yesterday, where she came upon our PM Narendra Modi, who was also there on business.

She shared her excitement about the ‘co-incidental’ meet with her fans by thanking the PM for his time.

Was such a lovely coincidence to be in #berlinðŸ‡©ðŸ‡ª at the same time as the Prime Minister. Thank you @narendramodi Sir for taking the time from your packed schedule to meet me this morning. ðŸ‡®ðŸ‡³

But where there are Bollywood celebrities, scandals follow. It did not take time for the news to catch on and the internet shamed Priyanka for showing her legs in front of the PM. Priyanka who was at a Baywatch promotion earlier donned a beautiful dress but the internet wouldn’t have it.

Next time please show some sense and manners and wear something more appropriate. Not expected such demeanour.

@priyankachopra this is the way you sit and give respect to elder and @PMOIndia ??? That too in other country! We have Indian culture!

PC this is what u had to wear in ur wardrobe .. shame

Well, turns out Priyanka wouldn’t have any of it either. While the internet was hating on her outfit, she took to Instagram and slammed her haters right back in true Chopra style.

This should be enough to set the ‘sanskari’ standards right while she continues slaying it with her mother by her side.

While she continues to take over the international movie industry, click here to enjoy some of the highlights from her trip. Priyanka Chopra made heads turn almost immediately when she arrived at the Met Gala 2017 in New York. The reason you ask? Her Ralph Lauren trench coat of course, with a train as long as it gets.

It did not take long for the photoshop experts on the internet to go gaga over her look and create their own rendition of what her look reminded them of. That being said, we have to admit that our beloved PeeCee isn’t one to cause unpleasant drama. She took the jokes in a positive manned and even went on to share the top six memes that she found the funniest.

Isn’t that sweet? Check out her top choices here:

1. The great pyramids of Giza had to be her top choice

5. We know the struggle

6. Every Indian car owner ever…

While the above were her favourite, here are some that made us laugh our hearts out

8. Swacch Bharat is our moto

Which one did you find the funniest? Tell us in the comments below. The Met Gala is one of the most sought after events of Hollywood. Held in New York, this is a fund raiser that bring together the best dressed celebrities of Hollywood.

While the Hollywood regulars like the Kardashian clan, Ryan Reynolds, Blake Lively and Gidi Hadid were among the attendees this year, we were especially proud to see our desi girl Priyanka Chopra and Mastani Deepika Padukone grace the event.

Priyanka Chopra was spotted in a Ralph Laurent Trench Coat with a thigh-high slit and a trail so long, that it needed a special assistant just to stay in place.

While Priyanka chose an unconventional boss lady outfit, Deepika went for a more elegant Greek goddess vibe. Her look consisted of a White dress with a deep v-neck and embellishments at the back and bottom of the gown. Check out the two B-Town beauties and their looks below.

Of-course she posed with Nick Jones

The Thigh-High slit is a must

The longest trench coat trail yet….

The embellished deep back

The Greek Goddess gown with embellishments at the bottom…

They surely are the trend setter of Bollywood. Tell us what you think of their look in the comments below.