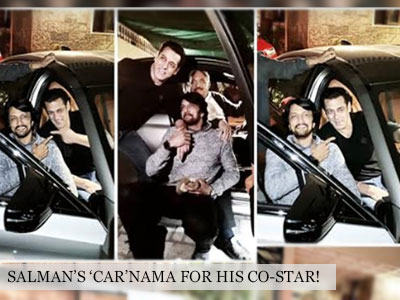 Salman Khan is known to be the pillar of strength for his friends and family in literally every situation. Not only this, he is also responsible to fulfill dreams of so many people. He makes you want to believe that dreams do come true. He certainly is one of the most kind-hearted souls we’ve come across.

Speaking of kind-hearted souls, the Dabangg 3 actor did something very special for his co-star Kichcha Sudeep. He essayed the role of a villain who was completely awe-struck when bhaijaan a.k.a Salman Khan surprised him with a million-dollar car. What’s more? As the sweetest gesture, Salman Khan headed straight to Sudeep’s house with the car. We’re sure his instant expression on seeing this luxurious gift must be priceless! On receiving the surprise the Kannada actor penned down a heartfelt note on Instagram for his beloved friend. Kichcha Sudeep, is surely nothing but elated!

“Good always happens when u do good.@beingsalmankhan sir made me believe this line further when this surprise landed at home along with him. BMW M5…. ? .. a sweetest gesture. Thank u for the luv u have showered on me n my family sir. It was an honour to have worked with u n to have had u vist us.???”

Good always happens when u do good. @beingsalmankhan sir made me believe this line further when this surprise landed at home along with him. BMW M5…. ? .. a sweetest gesture. Thank u for the luv u have showered on me n my family sir. It was an honour to have worked with u n to have had u vist us.???

Though Salman Khan and Kichcha Sudeep plotted against each other in the film, their off-screen friendship is nothing but sheer friendship goals! Apart from being a great human being, Salman Khan is also a great mentor for many in the industry.

After the success of Dabangg 3, Salman Khan is now prepping up for his upcoming film Radhe opposite Disha Patani, which is scheduled to release in May 2020. 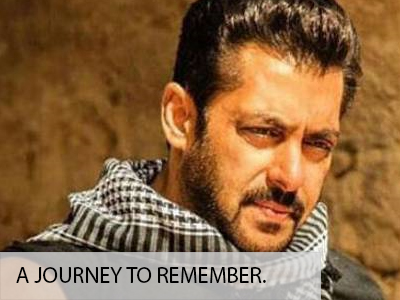 December was really a special month for none other than Salman Khan. The actor has been basking in the success of his latest release Dabangg 3. What’s more? It’s 27th December, his birthday and he didn’t get just one gift, he received 3 MAJOR GIFTS!

Salman Khan unlocked yet another milestone of his life as he completed 30 memorable years in Bollywood. From making his debut as the lead in Maine Pyar Kiya in 1989, the superstar thanked his well-wishers for keeping alive the same zeal and respect for this impeccable journey.

A big thank u to all my fans …

On the same day, the superstar celebrated his 54th birthday and without fail greeted his fans, who cheered out loud outside his apartment in Bandra. What caught our attention was Bhagyashree’s son Abhimanyu, who surprised the birthday boy with a Maine Pyar Kiya jacket. Now that’s a sweet nostalgia, isn’t it?

Hope you like your jacket ?♥️ He was the first person to ever advice me on becoming an actor in 2007. One of the first to be proud of me even before the international release of Mard in 2018 I still feel the strongest and most confident at times when I actually put his words to practice in my life. One of a kind in so many different ways. That Heart that Love. Happy birthday @beingsalmankhan #happybirthday #salmankhan

That’s not it, Salman Khan’s day brightened even more, as he became a proud Mamu one again to Arpita Khan and Ayush Sharma’s daughter, Ayat Sharma. The couple shared the good news on Instagram a few hours after her birth.

Welcoming our daughter into the world. Grateful & Overjoyed ?

Over the 3 decades, Salman Khan gave us some blockbusters like Dabangg, Bodyguard, Kick, Ek Tha Tiger, Bajrangi Bhaijaan, Sultan, Bharat. What’s interesting is that his films make it a point to cross the 100 crore mark in just a few days of its release. Talking about his years of experience, he said, “I have seen so much and met so many brilliant people along the way who have taught me so much and carved me into the person that I am. My motivation to work has always been the fans who give me unconditional love and it is because of them that I am always striving to deliver my best to them,” 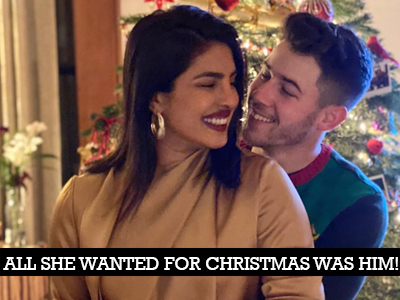 Priyanka Chopra celebrates every occasion with double the enthusiasm. The stunning actress indeed makes beautiful memories with her friends and families, despite her busy work schedule. On Christmas too, we love how she followed her mantra of ‘Family comes first’.

From what we saw, her idea of a celebration is indeed one to take notes from. She shared her favorite festive moments on Instagram and they’re nothing but admirable. It even got more exciting when Nick Jonas and Priyanka Chopra even posed to perfection with their Christmas tree as the backdrop.

It’s the happiest Christmas. From ours to yours. Merry Christmas ?❄️❤️

Not only that, he gifted her the ultimate gift of the season, a snow-mobile. In literally no time, our desi girl flaunted her effortless snowy ride with her husband. The couple also baked some delicious gingerbread cookies. Cute, isn’t it?

Santa drove in on my bat mobile!! Aaaah! My husband knows me so well! Thank you baby. I love you! #christmas ❄️?❤️

Recently, the duo revealed their first-ever collaboration, a web show that talks about the spectacular night before a wedding – SANGEET. For now, they titled it as the #SangeetProject. Good luck and wishes from Team Colors Cineplex for their venture as well as their future endeavors. 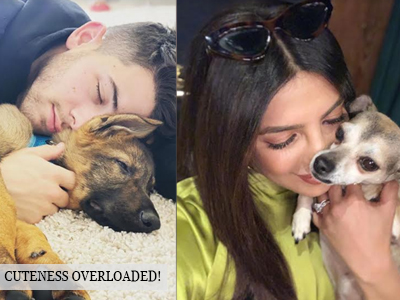 Priyanka Chopra’s marriage with Nick Jonas was talk of the town back then. Time clearly flew as they’ll be celebrating their one- year wedding anniversary on 1st December. And so to celebrate the BIG ONE, PeeCee decided to welcome a new furry member in their family.

Nick Jonas had a perfect rise and shine moment when a German shepherd pup hopped onto his bed. We still cannot get over the singer’s priceless reaction as his wife stunned him with this adorable surprise. The couple immediately shared their aww- moments on Instagram that makes us want to have a pup too!

Here are some cutesy pictures and videos that will definitely plaster a smile on to your face.

so much cute in the same frame. ??❤ happy almost anniversary baby. #repost @nickjonas • Pri came home with the absolute best surprise this morning. Please meet our new pup @ginothegerman I haven’t stopped smiling since I woke up this morning and finally realized what was going on. Thank you @priyankachopra ❤️ ?

Pri came home with the absolute best surprise this morning. Please meet our new pup @ginothegerman I haven’t stopped smiling since I woke up this morning and finally realized what was going on. Thank you @priyankachopra ❤️ ?

The couple named their doggo Gino, and in no time, he became an internet sensation just like his proud parents. The duo never fails to surprise each other with gifts that are out of this world!

Now we are desperately looking forward to their celebration! What about you? Salman Khan is known for his generous gifting habits toward his co-stars and friends. There have been several instances where he has gifted his co-stars with things they love dearly. So much so that he gifted his alleged girlfriend with a pony.

This time around his Chinese co-star Zhou Zhou was on the receiving end of a precious little gift. The Chinese star is an avid pet lover and has a special place in her heart for dogs. It is no secret that Salman Khan loves dogs as well. When he found out about her love for animals he went ahead and gifted her an adorable little puppy.

The movie Tubelight will be releasing on the 25th of June this year and our beloved Sallu is busy promoting the film. Even with his busy schedule he is allegedly in constant touch with his co-star. He frequently chats with her on Twitter or via private conversations.

Isn’t that just adorable? Tell us what you think of his gift in the comments below.