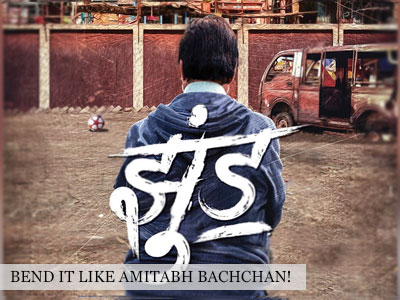 From being a recipient of Dadasaheb Phalke Award to effortlessly completing 5 long decades in Bollywood, Amitabh Bachchan is unstoppable. Inspiring us with his passion for cinema, the veteran actor is all set to return with his new film.

The superstar took to Instagram to share the poster of his next film ‘Jhund’ which looks promising, just like all his other films. Set against a busy backdrop, the actor is seen pondering over something and trust us, we cannot wait to find out all the details! As per sources, Bachchan sahab essays the role of Vijay Barse, founder of Slum Soccer and will be seen motivating street children to take up football. The film’s first look itself is making us restless.

Here’s the striking poster of Jhund that’s so eye-catchy!

Helmed by Nagraj Manjule, the sports-drama will be his first-ever collaboration with Big B. To add on, this film will mark his Bollywood directorial debut as well. We will also witness Sairat’s Akash Thosar and Rinku Rajguru in the lead roles. While the release date still under wraps, we’re pretty sure that this one’s going to be a blockbuster already!